April 12, 2011
If you think supercalifragilisticexpialidocious is not easy to remember try the most complex Chinese character related to a noodle's name. This word is so complex it is not in any Chinese dictionary or any computerised Chinese type set. Take a look at one single Chinese word with 57 strokes!

Biang biang* mian is a well known noodle from Shaanxi** 陕西 Province in China. It is famous probably due to the complexity of its name. Biang biang noodles is an ancient recipe, has been known for over a thousand years.

*Biang biang is not related or sounded like bang bang chicken.
**the terracotta army site in Xian is in Shaanxi province

It is still not clear how this weird and complex word 'biang' was created. Some said it was created by the restaurant who first made the noodles and gave it a weird name so everyone would take notice of it. There are also some folk tales saying the Emperor at the time created it. Here is a story quoted from this blog:

"One day, Qin Shi Huang, the first emperor of the Qin dynasty of terracotta warriors fame, was sick and lost his appetite for all of the delicate food available in his palace. One of his servants got him a bowl of biang biang noodles, which were sold by vendors in the streets of Xianyang, the capital of Qin dynasty near present-day Xian. Qin Shi Huang liked the noodles so much that he designated the dish as a must-have food in the palace. After Qin Shi Huang recovered, he went to the street to examine how the food vendors prepared the noodles. After he saw the whole process, he proclaimed, "People in Qin are great, Qin will unify the whole country, and the Qin people will be united and bravely ride horses to win battles to protect the land of Qin. May the Qin people have biang biang noodles every day and visit Xianyang every month." Qin Shi Huang took a brush and ink and created a character for "biang" including parts of all of the words in his statement."

This word 'biang' is difficult to remember or write. There are several ways how people try to remember it by using rhythmic songs/poems i.e. breaking the word into its original simple pictograms (simple characters like English alphabets) which form the complex ideogrammic combined word; something like breaking the word 'biang' into small pieces of jigsaws (pictograms).

Here is one example of the song or poem:

What is Biang Biang mian? 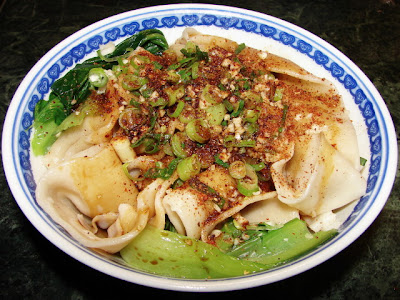 Biang biang mian is super wide handmade noodles about 4 cm. Some called it belt noodles. It's a poor man noodles with simple ingredients, flavoured with some chopped garlic, spring onion and a simple spicy sauce. The final drizzling with boiling oil bring out the flavour of the herbs and spices. Use freshly rendered lard for a even better flavour.

How to make Biang biang noodles?

spice mix:  (amount of spice mix is more than enough for this qty of noodles, keep excess for future use)
1.5 tsp sichuan peppercorns
1 tsp fennel seed
1 tsp cumin seeds
1 star anise, break into small pieces
1 - 3 tsp chilli powder or chilli flakes (amount up to you and spiciness of chilli)


about 1/3 cup of cooking oil or freshly rendered lard***

some green vegetable like pak choi
Method:
Dough is quite simple but must be stretchy.

Biang biang noodles are cheap but tasty. Good fun to make too.

***To render lard, cut some pork fat into small pieces. Stir fry till liquid fat is rendered and pork fat meat turns to brown and crunchy pork scratching. The pork scratching can be added to the noodles to add flavour.