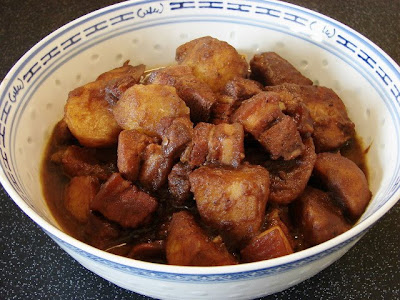 This is my mum's recipe and has been a favourite since I was a kid. This dish does not look very pretty but it is very tasty comfort food. The braising method is similar to hong shao pork. The meat is succulent and potato chunks are soft and absorbed all the meat and sauce flavour. I can eat this every week and still don't get tired of it.

The secret to make the potato very tasty is to deep fry in oil first. This makes the potato tastes sweeter and nuttier. If you hate deep frying you can add raw potato to the stew but the potato won't be as tasty.

Here is the recipe:

Method:
If you don't fry the potato, add raw potato to the pork after the meat has been cooking for around 20 minutes and add in enough water to cover the potato and meat and stew till meat and potato are tender.

I like the potato on the soft side, if you like it firm use less water and just cook till tender without the skin starting to break.

If you don't like belly pork, you can sub with spare ribs equally very tasty but you need more as there isn't much meat on the ribs. Increase the quantity to about 450 - 500g.
1. CHINESE 1d. Cantonese meat - pork