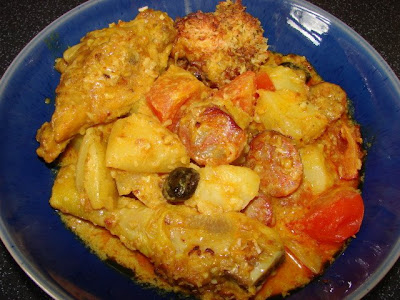 Macau is part of China now, it was the first and last European colony within China. Portuguese traders had settled and colonised Macau from the 16th century till its handover to China in 1999. Because of this, Portuguese had strongly influenced Macau's architectural buildings, culture and food. Macau has long famous for its tourism, gambling and food.

I'd been to Macau few times while I was working in Hong Kong. It's easy to get there from Hong Kong, just hop on the ferry. I love this place a lot. Every time we went there we were food crawling all day and all night till we dropped. My favourite Macanese food are fried pork chop buns, crab congee (rice soup), Portuguese style egg custard tart called 'po tart', all the Macanese snacks, Macanese chilli crab, African Chicken and Portuguese Chicken.

Macanese food many are Chinese - Portuguese fusion. I am very surprised not to find many Macanese recipes in books and on the internet.

Portuguese chicken (Po Kok Gai 葡國雞) is Chinese - Portuguese fusion. I don't think anyone can find this recipe in Portugal. This dish is like a mild chicken curry with Portuguese/Spanish ingredients like chorizo and olive. Very unusual combination, it works and delicious.


Here is the recipe, will feed 5 - 6 people. Can reduce quantity to make a smaller portion.