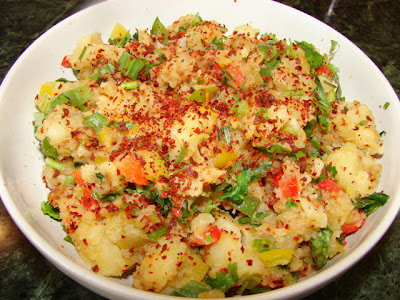 I often find similarities between western and oriental food like this stir fried potato which is similar to rustic English bubble and squeak (not the cake shaped type). Here to introduce to you a classic home cooking from Yunnan called lao nai yang yu 老奶洋芋 or old granny's potato. The reason why old granny or lao nai 老奶 is named after this is because this potato dish is soft suitable for grannies with no teeth.

Before I come across this recipe I never know yang yu 洋芋 is potato. These are different names all mean the same as good old potato:


馬鈴薯 direct translation is horse bell potato (I have no idea why and where this name came from), this term is more commonly used outside China, like in S E Asia.

土豆 translated as earth bean (because it comes from the soil or earth), this is the common name widely used in most parts of China

洋芋 direct translation is western yam or foreign taro, a term more common in some areas of China like Yunnan

In Chinese nai 奶 usually means milk. When we say nai as milk the tone is lower. A double word nai nai 奶奶 (in a higher tone, spoken in Mandarin) refers to paternal grandma or a general term for old lady or granny.

Enough of Chinese lessons, back to this lao nai yang yu. It is quite a simple home cooking. Cooked potato is mashed or crushed then stir fried.  Garlic, spring onion, dried chilli/chilli flakes and ground Sichuan pepper are commonly added to flavour the potato. Fresh and pickled vegetables can be added to add texture, colour and flavour like pickled mustard, pickled cabbage, Sichuan preserved vegetable (zha chai), carrot, celery, onion, sweet pepper, fresh chilli etc..... For a more luxurious touch, Yunnan air dried ham*  can be added if available for the meat eaters, if not normal chopped ham can be added too.

For this recipe I boiled 3 potatoes (about 350g), leave it to cool then crushed.
Chop a small handful (about 50g) of Sichuan preserved vegetable or zha cai, rinse to remove the salt then squeeze dry.
Chop a cup of different colour sweet pepper. I used red, yellow and green.
Chop a fat clove of garlic, 1 stalk of spring onion and some coriander (cilantro)
Heat the wok with some oil, fry the garlic then add Sichuan preserved vegetable. Stir and add the chopped pepper. Add the crushed potato. Keep stirring till heated through. Then add just a little light soy, not too much the preserved vegetable can be very salty. Sprinkle on a little ground sichuan pepper and chill powder. Stir and add the spring onion and coriander. Ready to dish up. Sprinkle on a little more chilli powder if wish. Serve hot.

* Yunnan ham 宣威火腿 is a famous air dried Chinese ham from Yunnan region. This ham is similar to Parma ham or Serrano ham. Lovely fragrant ham, normally eaten steamed or flavoured soups. This is another example of similarity between Chinese and Western food. Yunnan ham is available in most Chinese dominated S E Asia countries especially around Chinese New Year but alas it is banned in the west due to meat import regulations. 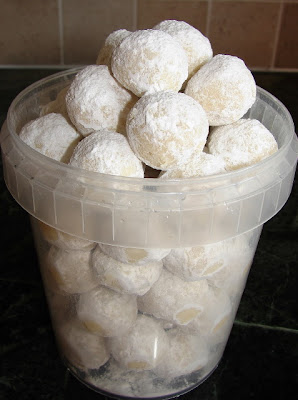 Other than Hari Raya, we also make these cookies for Chinese New year. Thus they are some kind of celebration cookies.

These cookies are very rich with ghee with a strong milky flavour. The icing sugar (confectioner sugar) coating makes them look like snow balls. The characteristic of kuih momo is it should melt/crumble as soon as you pop one into your mouth. Thus they are very fragile to handle.

For the recipe there is one unusual traditional step not known in western baking. It's to dry roast (stir fry) the flour prior to mixing the dough. Strange but it works to ensure the cookies melt/crumble easily. I have seen recipes heating the flour in microwa… 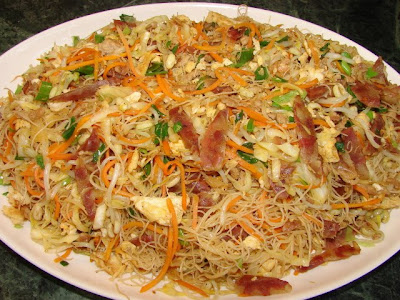 Rice vermicelli 米粉 (mee fun, mee hoon or fine rice noodles) can be a pain to stir fry. If anyone finds rice vermicelli always clump together, broken into bits and sticking to the pan/wok, you may find this post useful.

To make delicious stir fried rice vermicelli, there are a few rules to follow.
the noodles must be soaked with cold or lightly warm water, never use boiling water.
noodles must not be over soaked.
unless you pan or wok is guaranteed non stick with whatever you throw into it, one must not stir fry the noodles together with the vegetables or meat or you will find the noodles stick very quickly to the pan or wok. Here is picture to show the noodles are nicely separated and not broken at all using this method.


Below is the recipe how I normally do it if you like to give it a try. You can use various different vegetables and meat/prawns you have at hand. I always add egg to fried noodles. 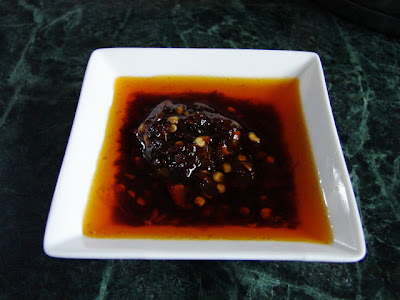 In Hong Kong and UK, Chinese restaurants always offer a dish of fiery chilli oil to eat with the meal or dim sum.

I have already posted a recipe for Sichuan style chilli oil. SichuanChilli oil is fragrant but does not have a savoury taste.

Cantonese chilli oil is slightly different, usually has dried shrimps, shallot and garlic which give it a savoury taste. The solid is as nice as the oil.

Here is a recipe if you like to make some at home.

5 - 6 tbsp cooking oil to be added after cooking