June 19, 2011
Toyomansi is my latest favourite sauce. It's a Filipino soy sauce with calamansi lime juice, a sourish soy with a citrus fragrance. I like it but having had fresh calamansi before, I have a suspicion some flavouring other than real calamansi is added but on the label flavouring is not listed. Toyomansi is available from most oriental supermarkets, quite cheap under £2 for a large bottle of 750ml.

Calamansi lime (or limau kasturi in Malay) is an S E Asian small sour citrus fruit, bigger than kamquat and much smaller than green lime, used in the same way like green lime. The flavour of fresh calamansi I would say a cross between kamquat and green lime. Recently I have found frozen whole calamansi at my local Chinese supermarket was tempted to get some but not sure if they are any good frozen.

Bistek is a Filipino word I guess derived from 'beef steak'. Bistek is normally related to a recipe of fried beef with onion. The beef is flavoured with soy sauce and calamansi lime juice. If you cannot find calamansi you can use normal green lime. Having bought this toyomansi I used it for this recipe which works quite well. This tart flavoured beef and onion is quite tasty with rice. Very simple to make. 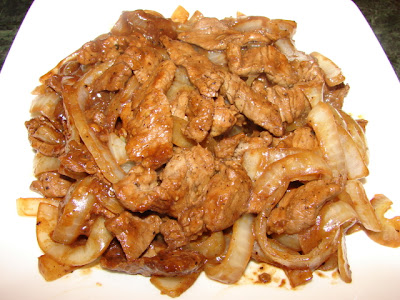